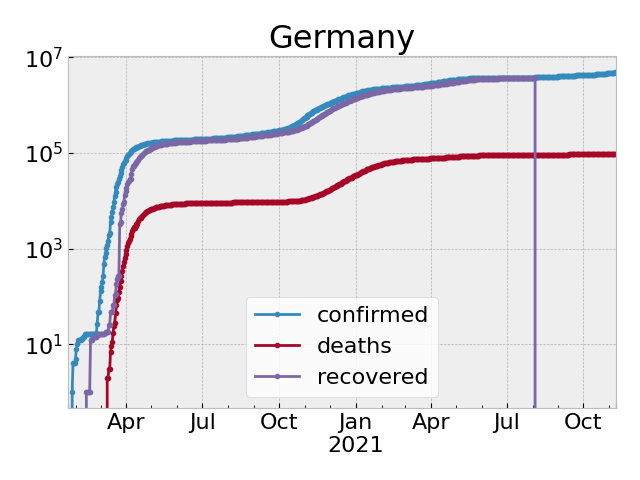 The John Hopkins University (JHU) collects data on how the COVID-19 virus spreads over the world and makes it available on github. In this analysis, we take the data and extract the numbers that describe how the growth of casualties develops. Looking at the trends in these numbers, one may deduce how fast or how slow the virus is spreading and also compare how the situation evolves in different countries.

Feel free to use the python implementation that produces the presented plots and that can be modified to show the results for any country that is in the JHU data base.

This post bases on joint efforts and discussions of the CSC group at the MPI Magdeburg.

The numbers in the presented plots are updated automatically1.

To see whether the exponential growth changes its dynamics, one may check whether the line in the logarithmic plot changes its slope (hopefully it gets less steep). That’s why we plot the slope of the logarithmic line that connects the numbers of two consecutive days. Since the data is wiggly, we also plot averages of the slopes over 2 or 5 days to better spot the trends.

It shows how, seemingly, the exponential growth in casualties did decrease some days after lockdowns have been implemented. In this analysis, we try to automatically detect such changes in the growth for a number of countries and represent it in an accessible form that allows easy comparisons.

We examine the (logarithmic) slope of the curves of the accumulated cases per day. That is for day d and the day d-1 before that day, we look at log2(x[d]) - log2(x[d-1]), where x holds the number of accumulated deaths for every day and where log2 is a function that computes the logarithm of a number with respect to the basis3 2.

To make sense of the numbers, we start with some example scenarios. In the plot below, we have plotted the values for some fictitious growth scenarios.

General Explanations of the Numbers

In the uncontrolled case, exponential growth is detected with a rate of 15[%] of daily increase. After some time, when most people have been infected the, growth decreases down to zero.

In the controlled scenario, the rate is brought down in the initial phase. Then, exponential growth happens at a lower rate (in the plot the value is about 5[%]) though for a longer time before it fades out.

To relate the slopes to the actual cases, in a second plot, we display the corresponding numbers of people that will need intensive care in a hospital. In our model, we assumed that 1.15% of the infected people will have to be treated in an intensive care unit.

We use the JHU for the last 100 days and plot the slopes for the last 90 days. The moving horizon of 100 days makes the changes of the last 3 months better visible. By plotting only 90 days, we omit a part of the wiggly behavior in the start of the data (which however is not relevant for the main part).

See the pdf file for more countries and a better resolution of the plots.

Since we look at the relative growth, so called saturation effects will make changes less visible. This happens in particular, with a high number of cases but a low number of active cases. In the long run, exponential growth will still be visible, but also the short term dynamics are of interest. For example, to spot the start of a second wave.

That’s why the following plots consider the daily numbers for the last 40 days (leaving aside all cases that happened before) and show the daily increase of the number cases in percent for the last 30 days.

This analysis is purely based on empirical trends. No statistical data analysis tools have been applied to (pre-)process the data, like data denoising (except that some outliers might not be shown because of the plot margins).

The initial work, namely making the data easily available in python as well as the code that produces the title picture, was done by Petar Mlinarić.